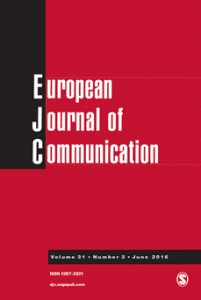 Last year, Slavko Splichal, who teaches communication science at the University of Ljubljana in Slovenia, reviewed Jörg Becker’s biography of Elisabeth Noelle-Neumann in the European Journal of Communication (EJC). Now, the EJC and SAGE Publications were obliged to retract his review because it contained numerous false and defamatory allegations.

When submitting his book review, Splichal did not disclose to the EJC editors that he has been on friendly terms with Becker for many years.1)In 1998 already, Splichal expressed his gratitude for Becker’s help in the following article: Communications, 1998, 23, p. 124, footnote 1. Thereby, Splichal violated the general obligation for scientific authors to disclose potential conflicts of interest.2)According to SAGE’s own guidelines, which Splichal had to acknowledge when submitting his manuscript, authors have to ensure that “any real or … Continue reading If an author dissimulates a relevant conflict of interest, journal editors must consider a retraction according to the COPE guidelines, the code of conduct for scientific publications that SAGE and the EJC adopted.3)COPE guidelines state: “Retractions are also used to alert readers to (…) failures to disclose a major competing interest likely to influence … Continue reading

When Splichal wrote his review, it was publicly known that legal proceedings had been initiated against Becker and that his biography had been withdrawn by the German publisher Schöningh because it contained false and defamatory allegations. Even a case of scientific fraud had been detected: Becker cited an “expert report” by the renowned US specialist Robert Wolfe according to which Noelle-Neumann’s denazification certificate was falsified. However, Wolfe never wrote any such “report,” as he confirmed in a written statement. As a consequence, Becker was obliged to provide a cease-and-desist declaration subject to penalty for this false allegation.

Even though Splichal was well aware of the legal proceedings against Becker and the withdrawal of his biography, he praised Becker’s book as “scrupulously” well researched and uncritically repeated all of his allegations – even those for which Becker had already signed cease-and-desist declarations subject to penalty. It seems obvious that Splichal was strongly biased by his hidden relation to Becker. Via SAGE, Splichal later explained that he did not deem necessary to mention legal proceedings in his book review. However, according to COPE guidelines, reviewers must alert editors to irregularities and misconduct.4)COPE guidelines state: “Peer reviewers (…) notify the journal immediately if they come across any irregularities, have concerns about ethical … Continue reading If a scientific publisher withdraws a book because it contains false and defamatory claims and if the author of the book has been obliged to sign several cease-and-desist declarations subject to penalty, a reviewer has to assume that the book is seriously flawed and must notify the journal editors.

As if the mentioned academic misconduct was not enough, Splichal managed to violate even more ethical standards. For instance, instead of writing his own summary of Becker’s main findings, Splichal – presumably for reasons of convenience – simply translated a lengthy passage from Becker’s book but did not mark it as a quotation. According to COPE guidelines, cases of plagiarism must be investigated and may require retraction. Instead of investigating the case, however, the EJC editors and SAGE have remained silent.

Splichal successfully destroyed the rest of his academic credibility by claiming in defense of his book review that Elisabeth Noelle-Neumann wrote an anti-Semitic article in Das Reich that not even Becker mentioned in his biography. Later, Splichal was obliged to tacitly concede that his allegation was solely based on hearsay (“… ENN is said to…”) and that in reality, this article does not exist.

If it was only Splichal who violated ethical guidelines, one might simply speak of misconduct of a single scientist. What is really troubling about the case is that the EJC editors and SAGE also repeatedly violated their own ethical rules:

Why have the EJC editors tried so hard to cover up Splichal’s academic mistakes and misconduct? It is not really difficult to come up with a plausible explanation. Two of the three editors – Peter Golding (Northumbria University) and Helena Sousa (University of Minho) – collaborated with Splichal on a ECREA task force last year. Golding also co-edited a special issue of a journal with Splichal and co-authored at least one article with him. Moreover, Golding serves on the editorial board of the internet journal triple C, which is edited by the neo-Marxist author Christian Fuchs (University of Westminster), a close friend of Jörg Becker. Incidentally, Becker also serves on the editorial board of triple C.

A summary of the legal conflicts over Jörg Becker’s biography of Elisabeth Noelle-Neumann may be found here.