Elisabeth Noelle grew up with her elder sister Gisela and her two younger brothers Ernst and Dieter in the house of her parents at Limonenstrasse 8 in Berlin Lichterfelde on the border to Berlin Dahlem, where the family had moved in March 1917.1)Family chronicle by Eva Noelle, Private Archives Elisabeth Noelle, Piazzogna. In October 1922, she attended the private school Kockert, and from 1926, she went to the Auguste-Viktoria-Lyzeum (high school) in Berlin Steglitz.2)Phil. Fak. 915, Promotionen, p. 59, Archives of the Humboldt-University Berlin. 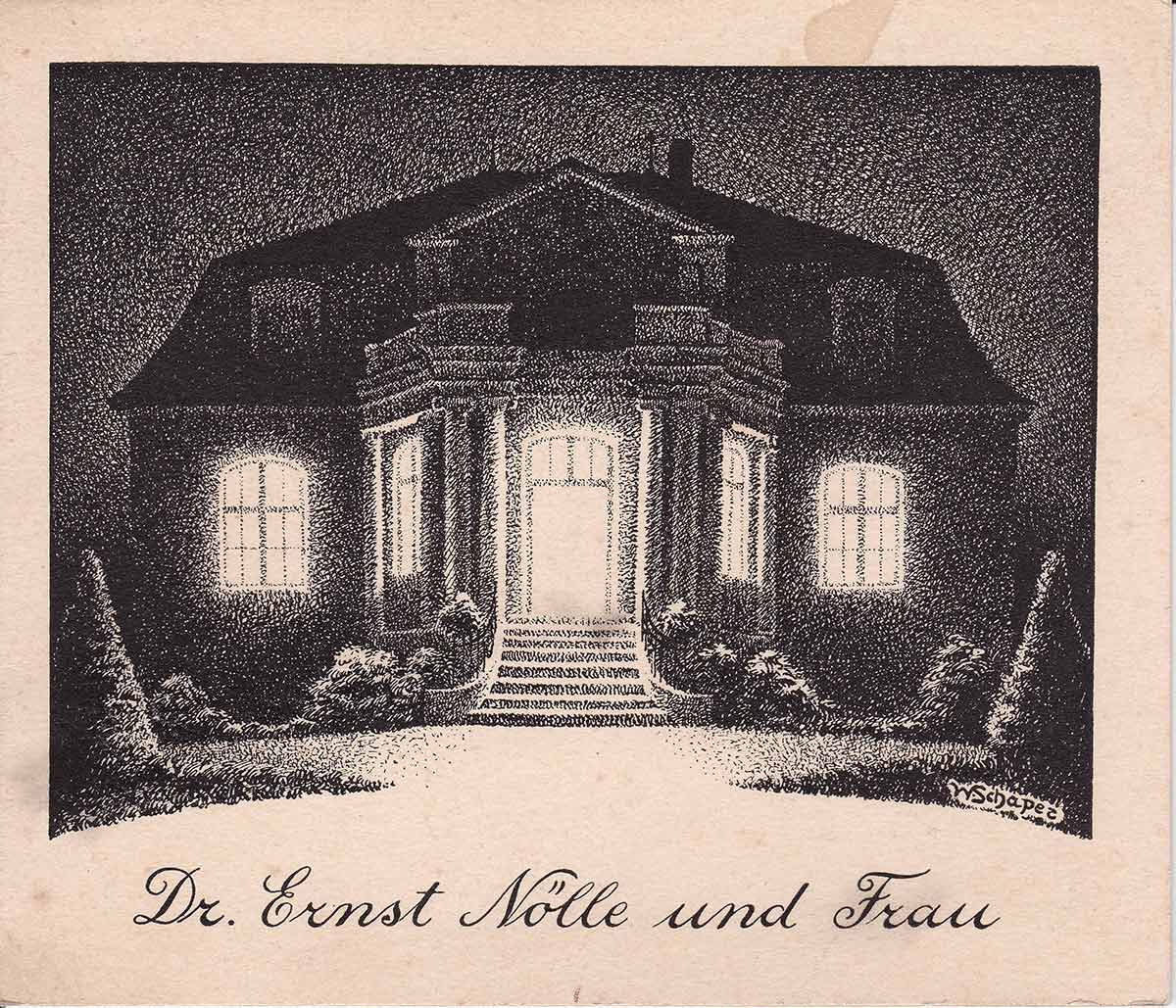 Well – now you won’t know right away who is writing here to you, and when you take a look at the signature, you won’t be any smarter. Of course not! For you don’t know me and I don’t know you either, that is: I have seen a picture of you in the magazine ,Funkstunde‘. It attracted my attention because what they usually serve you there are important-looking, bald old men or dancing girls with perms. 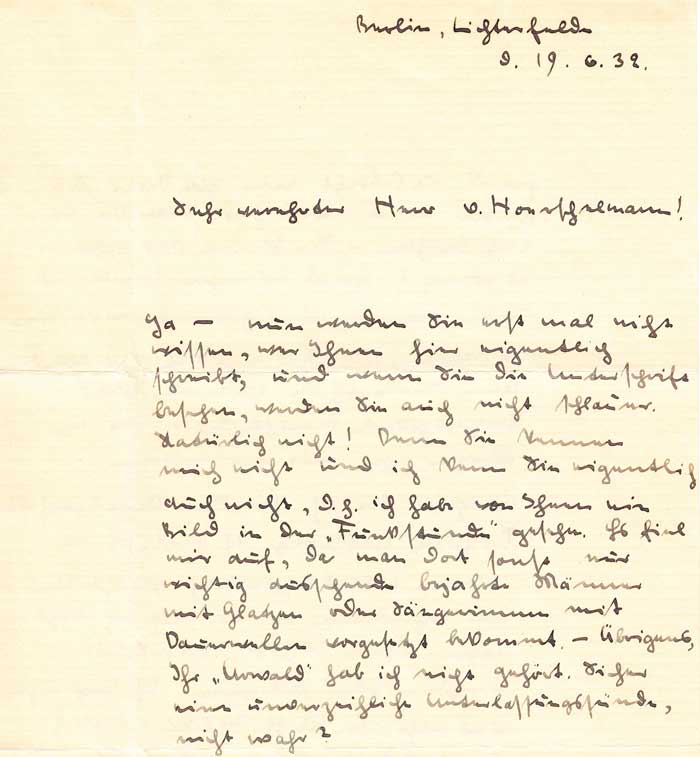 From the beginning, a personal relationship developed. But within this relationship you have always been for me the more finely organized being. You have always been MORE. There was, right from the start, your incomparable intensity, your vital perseverance, your instinctive ability to forge a life style – later, there was in addition the whole intelligible complex, the speed and accuracy of your thought. And where did you find this incomprehensible certainty with which you chose from what was available exactly what you needed, excluding at the same time what bothered you?

The friendship between the two expressed itself in a correspondence of around a thousand pages that only ended when Hoerschelmann died in 1976.5)The correspondence is kept partly in the Literaturarchiv Marbach, partly in the Private Archives Elisabeth Noelle, Piazzogna.

And from there I strode out, I knew that all alone I did not feel well, therefore I was looking for interesting people to exchange views with. But because this was very difficult, I founded a newspaper where young people aged 12-22 were supposed to write. All that worked out wonderfully, I ended up having 150 people, including many adults and some journalists, soon replies and ripostes were printed in my newspaper, and when the parties could not agree, they were all invited to my home. In this way, I became acquainted with my collaborators insofar as they lived in Berlin. Often they were very interesting and gifted. Last Easter [1932] I gave up the newspaper but stayed in touch with many people. In this way, I also entered a Russian circle and felt for the first time really well. I worked little for school but had a lot of other interesting things to do. My independence in thought and behavior did not please my parents, maybe because my take on many things was opposed to theirs.

I don’t have any independence here – no private life, you are not even safe from their opening your letters – that is why I have to seal this one too.

This is a school that wants to propagate the real German spirit and everybody who is educated here is supposed to propagate it later on in Germany. That is not exactly suitable for me because I am not in the least patriotic. And I find it difficult anyway to take seriously all those fancy methods of “soul education”.

In the same letter, she also laid out where she located herself politically. About one year earlier, as a 15-year-old, she had been „very enthusiastic“ about the National Socialists in view of the „fabulous recovery“. However, when she had read the party program and discussed it with her father, she had detected „numerous errors“ in it. She concluded:11)Letter from Elisabeth Noelle to Fred von Hoerschelmann, Spetzgart, January 30, 1933, Private Archives Elisabeth Noelle, Piazzogna.

If I had to elect, I would vote for a moderately right party that leaves you more or less in peace so that you can lead your life as you please without being meddled with by the „government”.

As I already mentioned to you, I was almost forced to leave this school. But it then went quite peacefully – the final result of my discussion with the principal was: That it would be better for me and the private school if I left because I am too mature. And she is right about it – for you have to be very malleable and immature to fit into this Salem school, to approve of it wholeheartedly.

During her studies at the two private schools, Elisabeth Noelle had considered leaving school ahead of schedule and applying for work at a newspaper because she was determined to become a journalist. Thereupon, her father asked a friend of his, the editor Heinz Ullstein,20)Heinz Ullstein (1893-1973) was one of 12 grandchildren of Leopold Ullstein, founder of the Ullstein Publishing House. At the age of 32, Heinz … Continue reading to discuss career plans with his daughter. Ullstein received the schoolgirl in his office at Kochstrasse in Berlin and encouraged her to become a journalist. At the same time, he advised her to finish high school with the “Abitur” because she would need that qualification to become a journalist, especially as a woman.21)The contact with Heinz Ullstein and his advice are mentioned in: Letter from Ernst Noelle to Elisabeth Noelle, Berlin, July 21, 1933. Private … Continue reading Following Ullstein’s advice, she decided to finish high school in order to obtain her „Abitur“.

You were probably my first success in that field. In the meantime, I have kept many young girls, including seven wards, from taking false decisions and engaging in false love affairs. With boys I would probably not have been that lucky. With them I did not even try in the first place.

When I think back of school, I always think only of the ideal image of the last year, and that lets me forget all the dry and gulped-down schooldays… in the last class, the questions woke up, the thirst for knowledge arose, which should later always remain the driving force.

While Elisabeth Noelle was still in high school, she went to the University of Goettingen and attended lectures of the sociologist and philosopher Eduard Baumgarten,27)Following a dispute with Martin Heidegger, Eduard Baumgarten abandoned his project of „habilitation“ with him at the University of Freiburg and … Continue reading a nephew of the famous sociologist Max Weber, on American philosophy.28)Elisabeth Noelle-Neumann: Die Erinnerungen (p. 38). Herbig, Munich 2006. Moreover, Elisabeth Noelle joined the academic tennis club and, much to her own surprise, won the women’s single title in the table tennis championships in February 1935, which was mentioned in the local newspapers.29)Letter from Elisabeth Noelle to Eva Noelle, Goettingen, February 8, 1935, Private Archives Elisabeth Noelle, Piazzogna: „What do you say about the … Continue reading

Elisabeth Noelle also participated in the extramural students’ life and in this way met two physics students, Peter Pringsheim and Heinz Maier-Leibnitz. After graduating from high school in March 1935, she went skiing with Peter Pringsheim in Zuoz in Switzerland.30)Letter from Elisabeth Noelle to Eva Noelle, Goettingen, February 16, 1935, and letter from Elisabeth Noelle to Eva Noelle, Goettingen, undated, … Continue reading His father Fritz Pringsheim,31)Fritz Pringsheim was a cousin of Alfred Pringsheim, father of Katja Mann, Thomas Mann‘s wife. See: Hans Maier: Böse Jahre, gute Jahre: Ein … Continue reading a law professor in Freiburg, was forced to resign in this year because his family was of Jewish descent – as a veteran of World War I, he had at first been spared from this discriminative measure. After being temporarily arrested in the concentration camp Sachsenhausen in 1939, he emigrated to Oxford. Heinz Maier-Leibnitz, who became Elisabeth Noelle-Neumann’s second husband in 1978, was a Ph.D. student of the Nobel-prize winner James Franck, who supervised his thesis from Copenhagen in Denmark.32)Anne-Lydia Edingshaus: Heinz Maier-Leibnitz. Ein halbes Jahrhundert experimentelle Physik (pp. 42-47). Piper, Munich 1986. Franck – just like Pringsheim of Jewish descent – was, at first, not removed from his position as a professor because of the so-called „privilege“ for World War I veterans. In April 1933, however, he vacated his professorship to protest against the discrimination of Jews in Germany. During the winter term 1933/34, Franck accepted a guest professorship at the Johns-Hopkins University in Baltimore, and subsequently emigrated to Denmark.