One year before Elisabeth Noelle’s graduation, the director of her high-school in Goettingen announced that in the future only pupils who were members of the National Socialist youth organization “Bund Deutscher Mädel” (BDM = League of German Girls) would get access to the university.1)Letter from Elisabeth Noelle to her family, Goettingen, March 3, 1934, Private Archives Elisabeth Noelle, Piazzogna: „And access to universities … Continue reading Possibly because Elisabeth Noelle did not join the BDM despite the pressure the school director exerted or because she had not yet completed the Women’s Labor Service,2)For the Labor Service, which was compulsory for students, see: Michael Gruettner: Studenten im Dritten Reich (pp. 227-28). Schoeningh, Paderborn 1995. she was refused a place at the Friedrich-Wilhelms-University in Berlin in the spring of 1935.3)Elisabeth Noelle: Die Erinnerungen (p. 42). Herbig, Munich 2006. In a similar way, the German politician Franz Josef Strauss was at first refused a … Continue reading Instead, she decided to attend courses in drawing and painting at the Private Art Academy Breuhaus in Berlin.4)Phil. Fak. 915, Promotionen, p. 59, Archives of the Humboldt-University, Berlin. 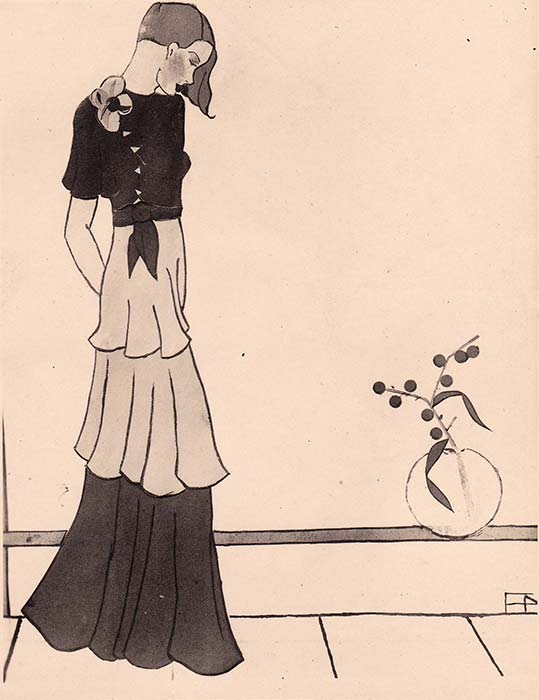 In the summer of 1935, Elisabeth Noelle was drafted for the “Frauenarbeitsdienst” (Women’s Labor Service). She served from July 16 through October 23 in Scharnhorst in the district of Lauenburg in Eastern Pomerania.5)Family chronicle by Eva Noelle, Private Archives Elisabeth Noelle, Piazzogna. Since Easter 1934, all students were obliged to complete a 6-month labor service, which was temporarily shortened to 13 weeks for lack of appropriate jobs.6)Michael Gruettner: Studenten im Dritten Reich (pp. 227-28.). Schöningh, Paderborn 1995. After arriving in Scharnhorst, she wrote to her mother that the camp was fortunately not very military:7)Letter from Elisabeth Noelle to Eva Noelle, Scharnhorst, undated (July 1935), Private Archives Elisabeth Noelle, Piazzogna. See also: Letter from … Continue reading

The operations are not National Socialist at all, the uniform is only worn during work for practical reasons and without coercion – no stupid and exaggerated speeches are given – there are no marches or commands – only work and comradeship are important.

However, the workload was very high right from the beginning, as she described in other letters to her mother:8)Letters from Elisabeth Noelle to Eva Noelle, Scharnhorst, July 24 and September 8, 1935, Private Archives Elisabeth Noelle, Piazzogna. 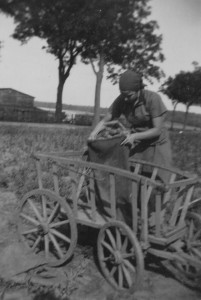 Work has been so exceedingly strenuous these last days that when you finish, you are close to falling. I bound rye for hours on end, without any break: My settler is exactly one of those who demand the most and exploit townsmen without mercy, and for this reason aids had already been withdrawn from his farm for a while. (…) And then rain came – permanent rain – with raindrops big like sparrow eggs, but work continued – continue to wash at the pump, with wet feet – continue to collect 8 baskets full of potatoes = 2 hours – you are kneeling in the mud and get soaking wet – wherever you hit with your pick, a little lake forms – and your feet seem frozen.

In Scharnhorst, Elisabeth Noelle met Imogen Seger, who became one of her closest, lifelong friends.9)How Imogen Seger and Elisabeth Noelle first met is mentioned in: Letter from Elisabeth Noelle to Imogen Seger, Berlin, February 24, 1936, Private … Continue reading Seger, daughter of the editor Fritz Seger and the pianist Marianne Heinemann, worked as a journalist for the “Brüsseler Zeitung” (Brussels’ Journal) during World War II. After the war, she published, among other journals, in the magazine “Der Ruf” (= The Call), which had been founded by the writers Alfred Andersch and Hans Werner Richter. Seger also worked for the Bavarian radio and the Institute for Demoscopy in Allensbach, for which she kept being active on a part-time basis in later years. In 1953, at the age of 37, she began to study sociology at Columbia University in New York, where she received her PhD in 1961 with a thesis on community churches in big cities, which was supervised by Robert K. Merton.10)Imogen Seger: Responsibility for the community: A new norm confronts tradition in lutheran city churches. The Bedminster Press, Totowa NJ 1963. At Columbia, Imogen Seger also met Paul F. Lazarsfeld and put him in touch with Elisabeth Noelle-Neumann and Erich Peter Neumann,11)The first meeting between Erich Peter Neumann and Paul F. Lazarsfeld, in the presence of Imogen Seger, is described in detail in: Letter from Erich … Continue reading as they were planning to edit several books by Lazarsfeld in German. In 1960,  a new edition of „Die Arbeitslosen von Marienthal“ (= The unemployed people of Marienthal), first published in 1933 by Lazarsfeld, Marie Jahoda, and Hans Zeisel, appeared in the small publishing company of the Institute for Demoscopy Allensbach.12)Marie Jahoda, Paul F. Lazarsfeld, & Hans Zeisel: Die Arbeitslosen von Marienthal. Ein soziographischer Versuch mit einem Anhang zur Geschichte … Continue reading Later Imogen Seger wrote an introduction to sociology, which was translated in different languages,13)Imogen Seger: Introduction to sociology: Theory, method, practice. With an introduction by Professor Robert K. Merton. Rupert Hart-Davis, London 1972. and an interpretation of religious consciousness in so-called primitive cultures – an analysis that was inspired by her husband, the English historian Rushton Coulborn.14)Imogen Seger: Wenn die Geister wiederkehren. Weltdeutung und religiöses Bewusstsein in primitiven Kulturen (= When ghosts return: World … Continue reading As a journalist, Imogen Seger wrote a series of articles in support of equal rights for women, especially in the academic world.15)e.g.: Imogen Seger: Sexismus hält die Frauen unten. Warum Männer an amerikanischen Universitäten als sozial wichtiger gelten (= Sexism keeps women … Continue reading