Naturally, Koenigsberg is grey in grey – an absolutely and systematically sober city – absolutely and systematically – this has already rubbed off from my new professor – for it is only thanks to such word accumulations that he manages to speak for 45 minutes despite a total lack of ideas. It is snowing in Koenigsberg – indeed only wolves and howling jackals are missing to complete the scene: East Germany. Well – just because of this I came her.

At the same time, my journalism professor is a work maniac – and expects the same thing from us – it is a chore to combine that. The tasks – apart from the eternal newspaper clipping fabrication, are literally hailing: Last week, it had to be an editorial, I chose “Japan – Russia” – because I knew least about it and it was therefore worthwhile studying. Moreover, the domestic political cliffs could be circumnavigated in this way – which can become really dangerous – for this man is also a fanatical National Socialist. Sometimes even my hair stands on end.

One of the tasks of the students was to write texts in different journalistic genres, such as – in addition to the already mentioned editorials – commentaries, columns, and local feuilletons. Elisabeth Noelle remarked on the latter in a letter to her mother:5)Letter from Elisabeth Noelle to Eva Noelle, Koenigsberg, May 15, 1936, Private Archives Elisabeth Noelle, Piazzogna.

Apart from that, I was busy: Three local feuilletons had to be written by Thursday for the seminar. At first I did not know what they should be like. Then I learnt that it is this small superfluous thing in the local section of the newspapers – about market women – or something like that. I had always considered these articles as primitive fillers. So I went out looking for local news – something a little difficult in a town one is not yet familiar with. Well, I turned to appropriate people – and had experienced one little story myself.

One of the mentioned three local feuilletons was published on May 19, 1936 in the local section of the “Königsberger Allgemeine Zeitung” – Elisabeth Noelle’s first newspaper article.

During her studies in Koenigsberg, she made several excursions to the Baltic Sea and the Masurian Lakes, mostly with a fellow student, who was a descendant of the natural scientist Carl Gustav Carus.6)Elisabeth Noelle: Die Erinnerungen (p. 49). Herbig, Munich 2006. On Pentecost 1936, she travelled to Finland,7)Letter from Elisabeth Noelle to Eva Noelle, Koenigsberg, May 15, 1936, Private Archives Elisabeth Noelle, Piazzogna: „For the foreigners of the ...continue in the company of a group of foreign students and their teachers, including the Romanist Karl Heinz Bremer.8)As from 1936, Karl Heinz Bremer taught at the Sorbonne and the Ecole Normale Supérieure in Paris. He joined the National Socialist party in 1937 and ...continue Under the title „Little excursion to Finland“, she published a report on this trip in the “Königsberger Allgemeinen Zeitung“.9)Elisabeth Noelle: Kleine Reise nach Finnland. In: Königsberger Allgemeine Zeitung, June 14, 1936. Newspaper article clipping, Private Archives ...continue 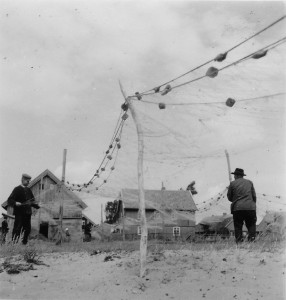 At the beginning of July 1936, Elisabeth Noelle travelled to the small village Pillkoppen on the Curonian Spit, where she had already spent some time one year earlier. This time, she met her boyfriend Joerg Jensen there. The two spent four weeks as pension guests in the house of a local fisherman. While her boyfriend prepared his university exams in medicine, she devoted herself to reading, writing, and painting.14)Letter from Elisabeth Noelle to Ernst Noelle, Pillkoppen, July 9, 1936, Private Archives Elisabeth Noelle, Piazzogna. From Pillkoppen, they made a short trip to the Lithuanian villages Nidden, Preil, Schwarzort and Memel in the so-called “Memelland”, a region that had belonged to Germany until 1919 and was again ceded to Germany in 1939 under the pressure of an ultimatum. In Nidden, they met Diedrich Osmer,15)Letter from Elisabeth Noelle to Eva Noelle, Pillkoppen, July 24, 1936, Private Archives Elisabeth Noelle, Piazzogna. a childhood friend of Elisabeth Noelle and her sister Gisela. After the war, Osmer worked for the Institute for Demoscopy Allensbach and later for the Institute for Social Research in Frankfurt. There he collaborated with Theodor W. Adorno and Max Horkheimer, became the first head of the research department16)See: Theodor W. Adorno Archiv (Eds.): Adorno – Eine Bildbiographie (p. 230). Suhrkamp, Frankfurt/Main 2003. and participated in the famous group experiment on attitudes of Germans toward National Socialism17)See: Alex Demirovic: Der nonkonformistische Intellektuelle – Die Entwicklung der Kritischen Theorie zur Frankfurter Schule (pp. 360 ff.). Suhrkamp, ...continue 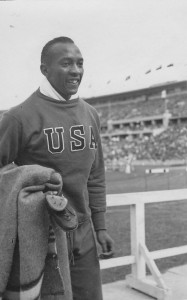 In August 1936, Elisabeth Noelle returned home to Berlin, where she voluntarily served in two factories for three weeks: two weeks in the printing company Schumacher, followed by one week in the cigarette factory Garbáty.18)Family chronicle by Eva Noelle, Private Archives Elisabeth Noelle, Piazzogna. At that time, half of the company was owned by the cigarette production ...continue After work, Elisabeth Noelle went to see competitions of the Olympic Summer Games – with her family, she had also attended the opening ceremony in the new Olympic Stadion of Berlin.19)See: Photograph of the Noelle family in the Olympic Stadion, August 1, 1936, Private Archives Elisabeth Noelle, Piazzogna.

At the end of August 1936, Elisabeth Noelle submitted her application for an exchange student year in the U.S. to the German Academic Exchange Service („Deutsche Akademischer Austauschdienst“, DAAD).20)Elisabeth Noelle: Jugoslawischer Reisebericht (= Yugoslavian travel report, p. 1). Bound 93-page typescript with photographs, 1936. Private Archives ...continue Nine months later, when she was studying in Munich, she received the official invitation from the University of Missouri and the Kappa Kappa Gamma Fraternity to spend one year at the School of Journalism of Columbia.21)See: Letter from Leslie Cowan, Secretary of the Board of Curators of the University of Missouri, to Elisabeth Noelle, Columbia, Missouri, May 17, ...continue 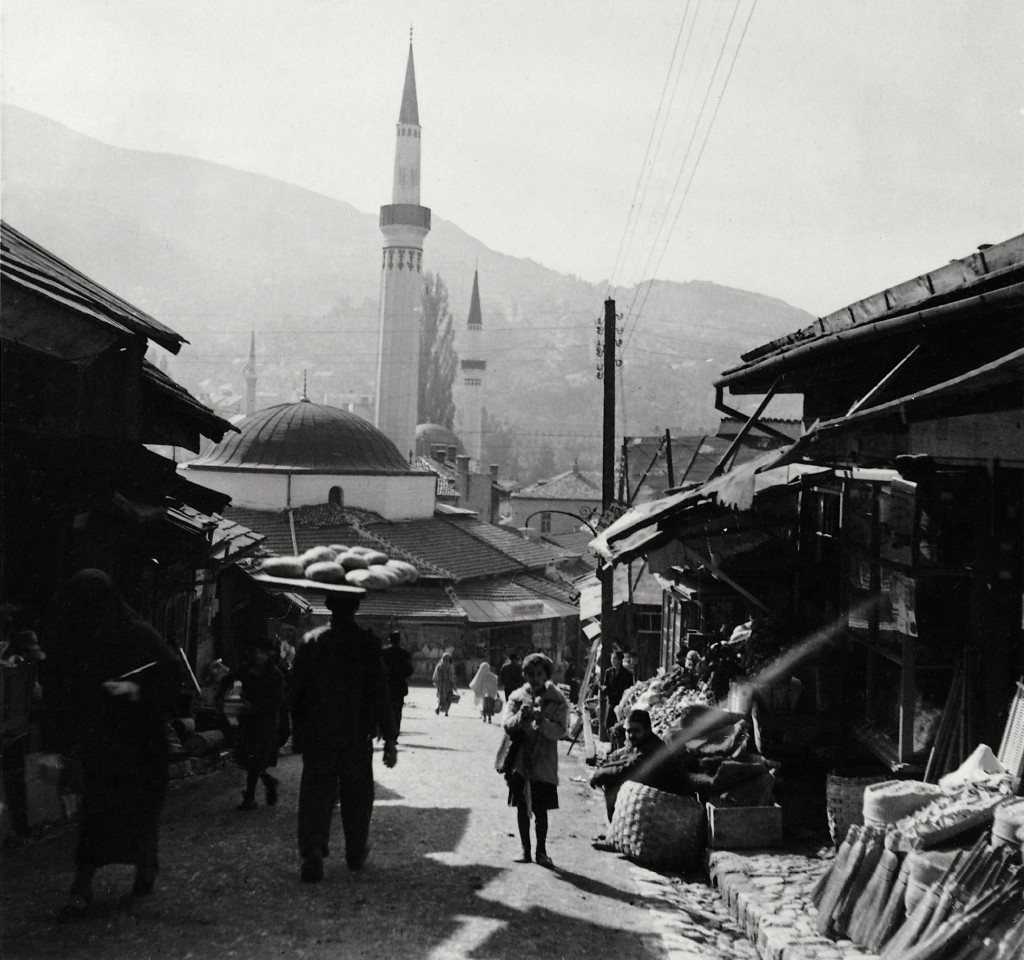 Her trip led her to Zagreb, the islands Susak und Rab, Split, Dubrovnik, Kotor, Cetinje, Mostar, Sarajevo, Belgrade and Novi Sad. She travelled by train and ship, spent the nights in simple hotels, and made excursions on foot, always in search of contact with local people. At the same time, she deliberately distanced herself from luxury tourism, which already existed back then:25)Elisabeth Noelle: Jugoslawischer Reisebericht (p. 54). 1936. Private Archives Elisabeth Noelle, Piazzogna.

Ragusa – on the timetable: “Dubrovnik”. I haven’t really been longing to see this place. An unpleasant odor is attached to this name – an odor of international luxury bathing resort, with corresponding arrogance, uneasiness, and tourist traps. But the timetable of the ship that will bring me to Kotor and Montenegro wants it that I spend four days here. And now it is raining. On the windowsill of my room, two ruffled up pigeons are perplexedly observing the rain fall.

From the beginning, Elisabeth Noelle was marveled by the Yugoslavian landscapes and the omnipresence of music in everyday life:26)Elisabeth Noelle: Jugoslawischer Reisebericht (pp. 49; 53; 91-92). 1936. Private Archives Elisabeth Noelle, Piazzogna. 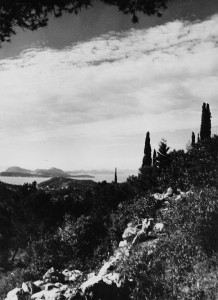 I think it was very imprudent of me to choose Yugoslavia as my first travel destination! All my dreams and fantasies of small Italian towns – of southern Seas – of Spanish islands, Provence, and French Riviera, and exotic Orient – I find all of that realized here! How much farther will I have to travel in the future to see something new, more beautiful, more exotic? (…) Music is at home in this people; in the small towns and villages, it is singing from all the doors and windows, and when I was hiking through the Dalmatian vineyards, it was as if I was walking through a singing land that is ringing from within: never-ending songs, jubilations, and cheers were resonating around me and only faded away as night was falling. (…) And from the music flows a special tenderness and gracefulness that lets me understand why a Yugoslavian boy told me that, in contrast to Yugoslavian girls, German girls are stiff like wooden boards!

In Elisabeth Noelle’s travel diary, themes emerged that later became important for her as a student, journalist, and public opinion researcher, for example the social situation of women in different cultures. At the University of Zagreb, she discussed this topic with the Dean of the Law Faculty:27)Elisabeth Noelle: Jugoslawischer Reisebericht (p. 13). 1936. Private Archives Elisabeth Noelle, Piazzogna.

But funnier even was when we were quarrelling over women’s right to vote. It seemed almost inconceivable to me that in a country where the percentage of female students is as high as in Yugoslavia – that in such a country women should not be granted the right to vote. – The professor said men and women would start to quarrel if both of them went voting.

In Elisabeth Noelle’s travel diary, there are also observations and reflections on the question as to which realms of life are publicly shown and which are hidden – an issue that later became important in her theory of public opinion:28)Elisabeth Noelle: Jugoslawischer Reisebericht (p. 61). 1936. Private Archives Elisabeth Noelle, Piazzogna. 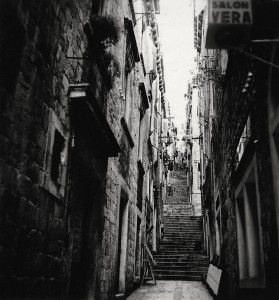 And especially in the Balkans, street scenery is quite revealing of people’s way of life. Strange contrast: Each alley is fringed with high walls, which would be almost forbidden in Germany. Private life seems to be anxiously hidden away from the public. On the roofs, on the balconies and in peacefully secluded courtyards, the scenes of family life take place. On the other hand, artisans, merchants, and office clerks work in the middle of the street. (…) How is the obvious contrast between the two forms of life to be explained? Is it the separation between the female and the male world? Of course, this distinction has already been blurred over here too. Yet you hardly ever see women in the street, and if then certainly not lingering around but working. Accordingly, it seems likely that in this country only women work, and you would not go too wrong with this assumption.

The penultimate stage of her trip led her to Belgrade, where she arrived at night in a train from Sarajevo:29)Elisabeth Noelle: Jugoslawischer Reisebericht (p. 89). 1936. Private Archives Elisabeth Noelle, Piazzogna.

Faces of towns are like those of human beings: There are daytime and nighttime beauties. (…) When my train was approaching Belgrade in the evening, the town announced itself by a long string of lights around it: We were running against these luminous points and finally broke through it. When I went for a walk on the heights behind Belgrade the next evening, I discovered that my visionary town wall was nothing else than a generously lit street that connects the town with one of its suburbs.